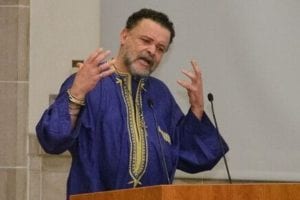 2020 Conference
Keeping It Wazi! From the Birth of PLC for Kijana
to the Further Development of NTU as Black Lives Will Always Matter
This presentation advances the ongoing pioneering legacy of the work of Dr. Frederick B. Phillips, founder of Progressive Life Center, by exploring the genesis of PLC (1980’s) and the NTU paradigm as a developing conceptual Afrocentric (humanist) framework for healing and wholeness in the 2020’s. The presentation explores the cultural social agency of Wazi (Clarity) as often expressed by Dr. Phillips which lead to his quest of the development of the healing model of NTU.

Dr. Richard M. Cooper is the first fulltime hire as a “family therapist” employee of Progressive Life Center under its first Afrocentric grant proposal in Washington D.C. in the 80’s.

Dr. Cooper, earned his Ph.D. at Temple University in Urban Education with an additional emphasis in African American Culture. He earned a Master of Social Work degree from Howard University and a Bachelor of Science degree in Health & Physical Education from West Chester University.

Dr. Cooper has been a member of the social work faculty of Widener University for 23 years and currently also serves as the co-coordinator of the African and African American Studies Minor.

Previously he was on the faculty of Temple University Social Administration (Social Work) for six years and part of the Afrocentric Social Work Institute under Dr. Thaddeus Mathis.

For 11 years, he hosted and produced a live weekly radio show in Philadelphia on a Black owned talk station “900 AM WURD.” His show was called “the Karamu” Feast which explored a range of diverse aspects on African American and other Africanist cultures.

Dr. Cooper has presented at many local, regional and national conferences that have explored themes related to African American culture, racism, hip hop and popular culture. He is a regular speaker and trainer in his professional interest areas. Recently he appeared in an article about the myths associated with Black Lives Matter for the Huffington Post.

He also served as an expert cultural witness of African American culture & Hip Hop-Gangsta rap, on a nationally covered federal criminal case, where the defendants were partially indicted on Hip Hop lyrics as an oral admission of guilt.  Dr. Cooper was a consultant for the defense.

Dr. Cooper considers himself to be a lifelong emeritus member of PLC as it will always be family to him. He considers this opportunity an honor to discuss the legacy of Dr. Phillip’s work.