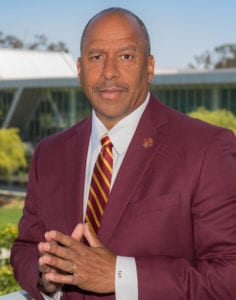 Thomas A. Parham, Ph.D., is a family man who resides in the Southern California area with his wife, Davida. Dr. Parham is the 11th president of California State University, Dominguez Hills (CSUDH), a highly diverse, metropolitan university primarily serving the South Central and South Bay areas of Los Angeles County. Established in 1960, CSUDH is one of the 23 campuses that comprise the California State University system, the largest system of public higher education in the nation.

Dr. Parham previously served as vice chancellor of student affairs and an adjunct faculty member at the University of California, Irvine, where he had been since 1985.

For the past 38-plus years, Dr. Parham has focused his research efforts in the area of psychological nigrescence and has authored or co-authored six books and 45-50 journal articles and book chapters. He has sustained a scholarly focus in the areas of racial identity development, African psychology and multicultural counseling.

In addition to his duties as president, Dr. Parham remains an active member of the community contributing his talents in the areas of social advocacy, community uplift and youth empowerment.